Stay up to date with us on

Home
About us
Reference Works

« Back to previous page

The wavelet transform theory can be found in many publications, among others on the Internet, as well. Like any transformation, it also has its inverse transformation.

The basic operation of wavelet is the decomposition of the input x signal into two frequency bands, followed by downsampling. The downsampling halves the sampling frequency.
In the inverse transformation the two signals are upsampled then filtered with a low pass and a highpass filter according to the picture. Finally these filtered signals are summarised providing the x’ output signal.
When applying the wavelet transform the spectrum of the signal will be halved so that only the LP band is decomposed further.

The x input signal is band limited in the range of 0 – π. The transformation procedure divides the x input signal into two parts with the help of a high pass (H1) and a low pass (H0) filter. These filters must be symmetrical to each other for π/2, that is the quarter of the sampling frequency. These filters are often called quadrature filters. H1 high pass filter is often called wavelet.
The signals after filters H0 and H1 are redundant, so they can be downsampled according to the sampling theorem. The output signals of the wavelet transformation are the LP and the HP parts.

Reconstruction upsamples the input signals, which means zero insertion between samples. With this operation the sampling rate will be restored to the original value. The upsampled signals are filtered by a low pass (G0) and a high pass (G1) filters respectively, then they are summarized.
The above arrangement is known as quadrature mirror filters (QMF) as well.

PR means that the QMF bank is free from ALD, AMD and PHD, expressed in time domain: x'(n) = c * x(n – d). It means, that the only difference between x and x’ is the c multiplication factor and the d delay time.
In order to eliminate the distortions mentioned above many procedures were developed. The best known procedures are realized by using FIR filters (Haar, Daubn, etc).

The wavelet transform decomposes signal into two frequency bands (LP, HP), then decompose the LP part into two further bands (LP, HP) until it is necessary. Below is an example of four level decomposition. 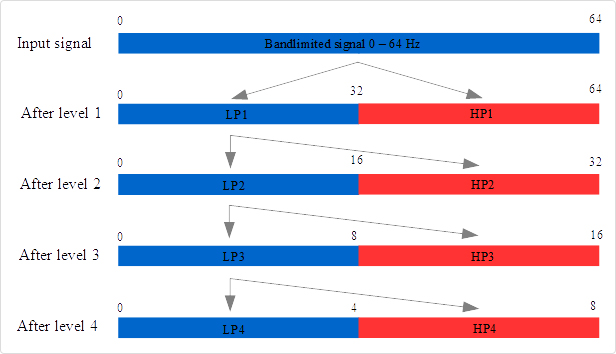 As it is shown in the picture above the input signal is band limited in 0 – 64 Hz. It does not contain components above 64 Hz. The sampling frequency is 128 Hz.
The first wavelet transformation (level 1) decomposes the input signal into two bands, LP1 and HP1. Both bands have 32 Hz bandwidth, LP1 is in the range of 0 – 32 Hz, whereas HP1 is in 32 – 64 Hz.
The input of the next transformation (level 2) is LP1, the outputs are LP2 and HP2. It can be seen, that the bandwidth is halved after each transformation. The above picture is valid for both the transform with downsampling and the transform without downsampling.

In practice wavelet transformation is often used as filter bank with downsampling. In such cases the reconstruction is not used, restoring the original signal is not necessary.
The decomposition procedure is the same as it is described above. Both the LP and HP parts will be redundant after decomposition because of the halved bandwidth, therefore we can use downsampling procedure according to the sampling theorem.
The downsampling halves the sampling frequency after each decomposition, so the number of the samples will be halved as well.

In practice, it is often necessary to decompose a signal into several frequency bands (multiresolution analysis) so that the decomposed signals shall stay in sync with the original signal and with each other. Case like this is for example, when we detect some kind of event based on one of the decomposed bands, but other bands are also required to characterize the event. Another example is, when we want to subtract one of the components from the original signal. This operation can be done if all the signals are in sync with each other. This operation is often called denoising.

In such cases downsampling is not applied, and it is recommended to use odd-order FIR low-pass filter in the wavelet transform, because it ensures the sync between signals. This type of wavelet transform is called a trous algorithm.
Without downsampling the transformation can be performed if the filter is upsampled (zeros are inserted between coefficients).

Two problems occur with using the upsampling procedure. One of them is called crosstalk distortion, see picture below. The other problem is that the filter transfer characteristics is changed in each level, so it is complicated to specify the frequency response of the filter bank. 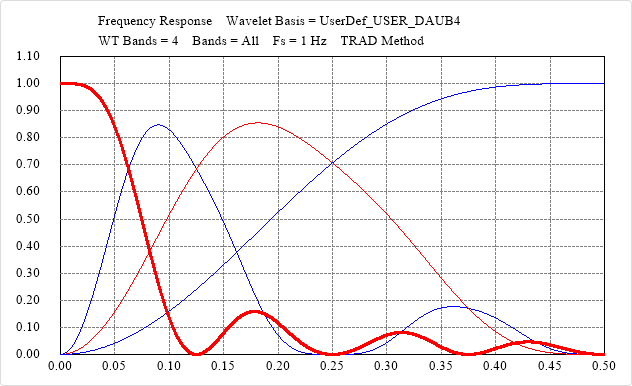 Filter Design software packet provides useful assistance for designing wavelet filters, with which the distortion can be eliminated from filter banks. 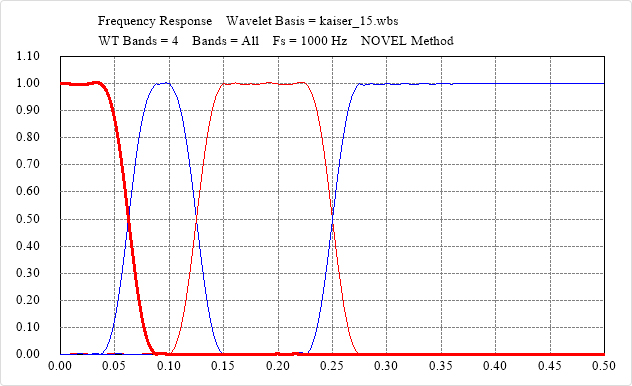 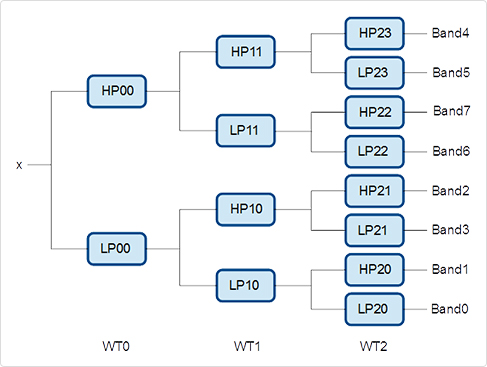 An HP band can be decomposed in two ways. The first way uses downsampling. In ideal case it can be done without violating the sampling theorem. The downsampling moves the mirrored HP band to the place of the LP band. Decomposition of this modified HP band can be done with the known method. In order to transform the result to its original frequency range an upsampling and a highpass filtering has to be applied. We have to count with the aliasing distortion if the order of the LP and HP filters are not adequate.
The second way to decompose HP band when we do not use downsampling. In this case the filter has to be upsampled. The operation of this method can be understood on the bases of the following explanation.

HP11 filter is upsampled. The frequency response of this filter is colored by red. See picture below. 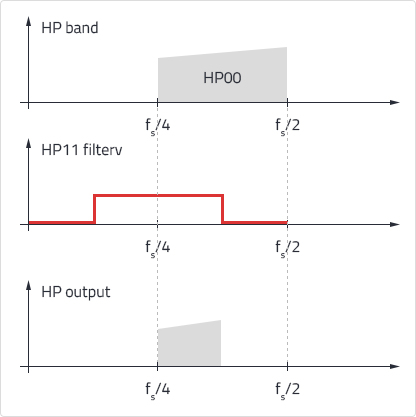 LP11 filter is upsampled. The frequency response of this filter is colored by blue. See picture below. 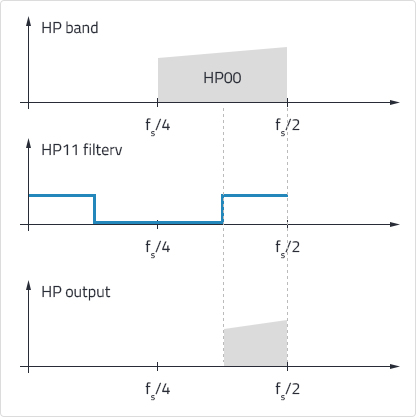 The frequency response of the upsampled filters can be checked by the FIR IIR Filter Design module of Filter Design software packet.

We face the crosstalk distortion problem when do not use downsampling in the wavelet packet transform. 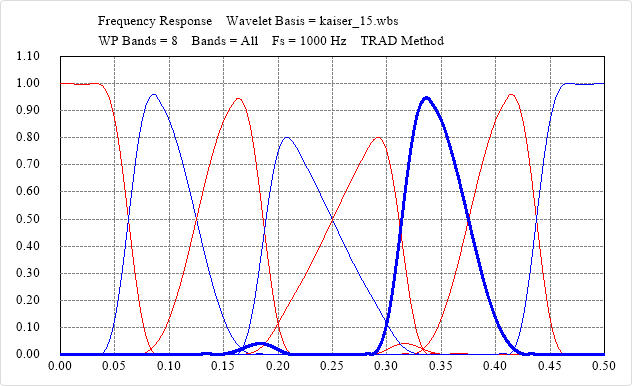 Filter Design software packet provides useful assistance for designing wavelet filters, with which the crosstalk distortion can be eliminated from filter banks. See picture below. 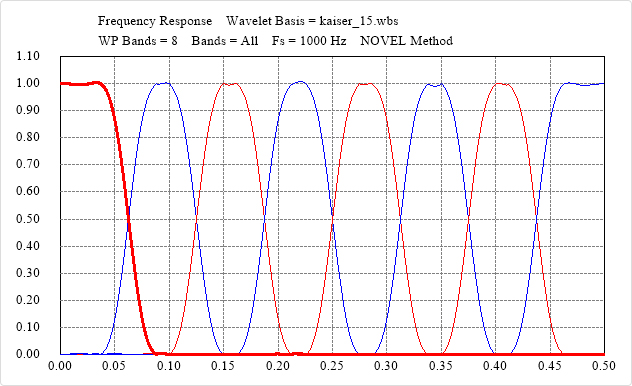